On fear and critical thinking

I shared the following meme on the Puente’s Perspective Facebook page. 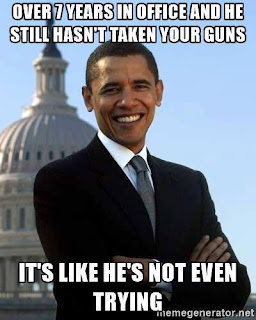 It got a couple of “Likes” and a single comment that appeared to be an attempt at a rebuttal:


“Evidently you aren't a veteran. Here's just ONE example…”

The comment included a link to what appeared to be a “BREAKING” news report.

In response, I would first like to point out to the commenter that I am, in fact, a veteran and—as long as we’re making clarifications—let’s take a look at this “BREAKING” story a little more closely.

That all-caps lead in the headline just begs to be clicked. It’s an excellent example of “Click Bait.”
If the commenter’s link were to take its readers to an actual legitimate news source, I might be inclined to take it more seriously. However, the website that hosts this particular “report” is called “The Truth About Guns.” In my experience, any publication or program that purports to be a source of credible information and feels they need to drive that point home by including the word “truth” in their name is usually suspect.*

The headline goes on to summarize the story thusly:

The first half of the headline is a clear attempt to anger conservative, pro-gun readers by appealing to their fears that the government will try to take away their guns—to say nothing of the general disdain conservatives have for government agencies in general.

The fear and anger evoked by the first half of the headline is tempered by the second; a patriotic assurance that the VA was “stopped” because “Citizens” and a sheriff stood guard to protect the veteran and his Second Amendment rights.

Since I received the link in a comment on my Facebook page, I felt a certain obligation to hear out the opinion shared by the commenter. So I read the article in an attempt to get the “whole story.”

The report did link to a number of sources (half of which resided at the same website) but I couldn’t help but notice a disparity between the headline and the story itself.

While the headline read that the “VA [tried] to Confiscate [a] Disabled Vet’s Guns…” the article itself refers to “the VA forcibly confiscating the firearms of a disabled veteran” as a “nightmare scenario” that “almost happened.” (emphasis added) I guess this is what one would call “click-bait and switch.” Come to think of it, most click-bait is like that.

The writer goes on to say, “…the VA was stopped in its tracks by a grassroots group of local residents. And the sheriff. And some politicians. All of whom stood on the man’s front yard to prevent the confiscation.” (sic) His choice to go with full stops instead of comma’s caused me to imagine the words being spoken by William Shatner.

This description conjures up the image of a VA bureaucrat trying to get to the veteran and his guns only to be thwarted by patriots guarding his front door. The bureaucrat, unable to complete their assignment then limps back to their office in the dark dank corridors of the nefarious Veterans Administration (wherever that is).

An uncredited and un-captioned photograph at the top of the page shows a number of people gathered in front of a house, some holding a banner (facing away from the camera). One can only assume that this was taken at the location of the events being reported but without a description to identify the people standing outside it or any representative(s) from the VA, one really can’t be sure.

The next part of the report quotes an Associated Press article (conveniently including a broken hyperlink) which describes the residents’ presence at the house of Navy Veteran John Arnold in a very different tone:

“A group of residents in northern Idaho lined up outside a U.S. Navy veteran’s house on Thursday to protest claims that federal officials are planning on confiscating the man’s weapons.” (emphasis added)


So, this whole thing was a protest? The headline suggested that these people were guarding the house. The AP article makes it clear that they were just protesting and states that “…Bonner County Sheriff Daryl Wheeler… promised to stand guard against any federal attempts to remove Arnold’s guns…”

The Sheriff didn’t even say that he was standing guard, only that he promised to do so. But weren’t those jack-booted VA thugs already there ready to stomp on the Second Amendment? The “Truth About Guns” headline said that they were “Stopped by Citizens and [the] Sheriff Standing Guard.”

No, actually. There were, in fact, ZERO representatives from the VA on Arnold's property (or anywhere near it). According to a local news report, a representative from Bonner County Veteran Services did make an appearance to specifically state that “the VA inspector would not be coming to Arnold's house that day.” So, no actual attempt to confiscate anyone’s guns was made. Which is to say that NOTHING was actually “stopped.”

The AP article, which I was able to find elsewhere, bears a much more accurate title to describe what really happened: “Gun-confiscation fears lead to protest in northern Idaho.” It goes on to state:


“Veteran Affairs spokesman Bret Bowers confirmed a letter had been sent to Arnold from the VA's benefits office in Salt Lake City… Bowers added that the agency doesn't have the authority to confiscate weapons.

“'We don't send officers to confiscate weapons. We are about providing health care to veterans,’ he said.” (emphasis added)

I would like to have seen the letter Arnold received from the VA to confirm that it did, in fact, say what he claims it said but, as far as I can tell, he hasn't released it to the public. I did an internet search to try and find similar letters from the VA and the results were interesting. It would seem that Arnold received a VA form letter informing him about a decision made by the VA regarding his mental capacity (the letter would also include instructions on how to appeal said decision). As reported by the AP:


“Currently, the Veterans Affairs Department can bar veterans from purchasing guns if they are declared incompetent…‘This does happen sometimes, where the VA sends out a letter,’ said Bryan Hult, veteran services officer for Bonner County. ‘Especially if a veteran has dementia ... and a fiduciary has to be appointed to manage finances like a pension and income. You wouldn't want that person to be in possession of a gun.’”

Stories about “Obama” or “The Government” trying to confiscate guns have been floating around for years, mostly in e-mail in-boxes and conservative blogs. Not so much from credible news sources because it’s generally understood by professional journalists that “news” is about things that have actually happened and can be verified by multiple sources. Speculation about things that might happen, “almost happened” or may have happened according to second-hand sources or a single source with no additional witnesses to the supposed event are not, technically speaking, news.

Everyone is free to speculate about whatever they want and post those speculations to their blogs, social media accounts or e-mail lists but to couch that speculation in terms—even typical journalistic formatting—that make it appear to be a report of actual events is unethical and irresponsible.

It’s unfortunate that in my lifetime, I have witnessed the general public’s capacity to exercise critical thinking diminish significantly over the years. As public investment in education has withered, the ability of citizens to discern fact from fiction has also eroded.

The proliferation of websites that look like legitimate news sources but publish invented stories with an eye toward spreading fear, hoaxes and general misinformation is bad enough (these sites cover their asses by stating that they exist to entertain through satire and parody, but these disclaimers usually reside on difficult to find “About” pages). What's even scarier are the number of online newsletters and biased bloggers who call themselves “citizen journalists” who do little more than parrot party lines and “report” (editorialize) the news by trying to divine some imagined hidden agenda supposedly written between the lines in actual news articles. The only reason the frauds who produce this pseudo-journalistic rubbish are so popular is that so many people out there simply don’t know how to think critically, to question the veracity of anything that’s presented to them as “The Truth,” the people who present it or the special interests they represent.


*The official newspaper of the Communist Party of the Soviet Union was called “Pravda” (literally, “Truth” in Russian). Even Soviet citizens knew to take its headlines with a grain of salt. I’m sure at its hight, Pravda was as “Fair & Balanced™” as Fox News and would never cop to tilting their journalism in favor of any particular agenda or, heaven forbid, misleading their audience.

Here are some additional—and credible—sources on the topic of Veterans and gun rights.