A friend of mine shared a link to a story titled, “Five Times Obama Put Conditions on Foreign Aid and Democrats Didn’t Care.”

I normally just scroll past such headlines but this time I made an exception because it just so happened to be a week during which Articles of Impeachment were presented against the President of the United States, principally for an attempt to place extralegislative conditions on military aid to Ukraine.

The story suggested that Barack Obama did the same thing as his successor on multiple occasions and got away with it. I was genuinely intrigued by this supposition and clicked on the link to learn more.

I have some experience doing online research for my own writing and I put a sincere—and I think, thorough—effort into making sure that the information that I present is accurate before expressing an opinion about it.

I subscribe to the adage by the late Daniel Patrick Moynihan that “Everyone is entitled to his own opinion, but not to his own facts.” That being said, I also try to verify claims made in essays, Op-Eds, political commentaries, and blog posts written by others, usually starting with the references provided by the authors themselves—which can lead down some interesting online rabbit holes, filled with circular reasoning, biased assumptions, and shark-jumping inferences. Following the sources referenced in this particular story certainly did not disappoint in that respect. While there were plenty of direct links to legitimate news articles, there were also several links to stories on other blogs with similar political leanings. One of which contained 29 links as sources for some very bizarre claims, most of which were on the same web site. Only 6 of those links directed the reader to external sources.

It’s not unheard of for journalists to reference their own first-hand notes as their source for information when reporting, but when it comes to writing editorials and opinion pieces, there is still a need to effectively source any claims one might be making. The self-referencing that goes on with a lot of political blogging is tantamount to saying, “The crazy thing that I just wrote must be true because one of my colleagues said it in a different story on this same web site.” I guess that puts the burden of proof on the colleague to source the crazy. References that only take a reader to a different story from the same source are immediately suspect. Oftentimes, a simple keyword search is a much more effective and quicker way to determine the veracity or falsity of statements that might give one pause.

The US has given a lot of financial support to a lot of countries over the years for humanitarian purposes, to promote economic development and, of course, to shore up foreign militaries—usually presenting lucrative opportunities for American defense contractors.

Regardless of the reasons behind financially aiding other countries, foreign aid has always been provided with “conditions.” However, it should be noted that said conditions are “congressionally mandated”—i.e. written into the aid legislation by Congress, not the President—and aid to Columbia, Nigeria, Israel, and Ukraine is no exception. Provisos related to addressing corruption, counter-terrorism, and respecting human rights are practically boilerplate language in aid legislation.

In the case of Uganda, the Obama administration acknowledged the Executive branch’s ability to recommend conditions tied to US aid in the budget it’s constitutionally required to present to Congress every year. Since Congress has the ultimate authority on any conditions attached to the money they appropriate, it’s up to them to decide whether or not to include the President’s recommendations—and they’re under no obligation to accept any of it. When the Obama Administration diverted congressionally appropriated aid to Uganda, it did so based on the conditional language written by Congress when they approved the aid—in that case, based on Human Rights clauses.

Mick Mulvaney wasn’t completely wrong when he said, “We do that all the time” regarding “…political influence in foreign policy.” What he doesn’t seem to understand—and a lot of other people, apparently—is that regardless of what might be discussed between a President and their foreign counterparts requesting aid, any conditions tied to such assistance have to be approved by Congress.

Sitting Presidents have highlighted such conditions for decades as a matter of standard diplomatic practice but they cannot tack on additional conditions after the legislation has been passed and signed into law—unless Congress specifically grants them that authority. 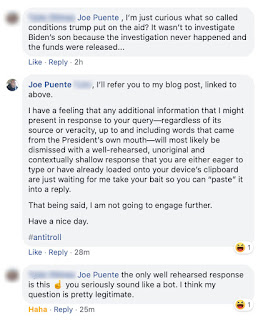 I shared this post with the friend that I mentioned in it in a social media comment. A third party replied to it in an attempt to engage me in a debate (See attached image).


I found his observation that I “sound like a bot” to actually be kind of flattering. I tend to employ a writing style that's been referred to as “terse”—and I happily own it—because the language that I use is direct and to the point.

However, in this case, I think what the party finds to be “bot”-like is the fact that I have obviously chosen my words carefully, punctuated them appropriately, proof-read them, and put some thought into how they were formatted.